Waco: The Rules of Engagement | Waco: A New Revelation

Waco: The Rules of Engagement (TROE) is probably the best documentary on the subject of the siege, while Waco: A New Revelation (ANR) fills in some of the gaps, but in truth, doesn't add a lot extra overall. If you only watch one, it should be the former.

The raid on the Branch Davidian compound began on February 28, 1993 by the ATF. 6 Davidians and 4 ATF agents died that day, after which, the FBI took over in a siege that lasted 51-days, eventually involving the military and the usage of a tank, ending with the compound burning down and an additional 76 Davidians dying by April 19, 1993. There's still speculation to this day whether or not the fire was started by the government (inadvertently or deliberately)

The warrant was acquired based on very weak evidence, and it's debatable if there truly was probable cause to justify the warrant at all.

An interesting and well-sourced read on the subject of the warrant and a chronicling of the evidence can be found here.

Sexual abuse allegations make up a sizable chunk of the warrant, but those charges are outside of the jurisdiction of the ATF, and any investigations involving child abuse in regards to David Koresh, the leader of the Davidians, had been closed prior to the warrant being issued. It would seem the main reason to include these allegations was to poison the well and turn the public against Koresh.

The Davidians had invited the ATF to inspect their facility at least twice. And even Koresh suggests that the ATF could have seized him when he headed to down, if that was their main concern. 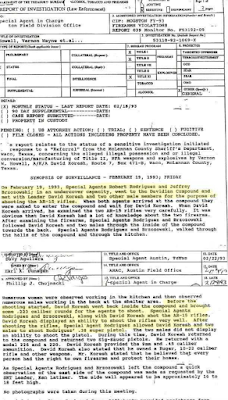 An image of a document showing that he had allowed undercover agents to use his guns (Koresh actually was at least aware of Rodriguez being undercover).

Instead they head to the compound in full riot gear with rifles. It's not clear who fired first, but the footage and activity logs have conveniently disappeared. It's suggested by both those who are sympathetic to the Davidians and even people like Mark Potok, who subscribe to the official narrative that paints the government in the best light possible, that the shooting might have begun when dogs rushed out of the compound and were shot by ATF agents. Soon after, Koresh and Perry were shot.

Rivero (There are some images of mangled and burnt corpses within the link) makes an interest case for the ATF firing first. Indeed, the ATF are concealing themselves behind the vehicles and none of them appear to have any bullet holes, but there are an ample amount of bullet holes at the door and spread throughout the building's facade. Furthermore, charges of murder and conspiracy to commit murder were dropped, though some of the Davidians went to jail on other charges (six Davidians went to federal prison for manslaughter and weapon offenses).

Especially harrowing is the call to 911 made by one of the Davidians requesting they call off the ATF who are spraying them with rifle fire, reminding them that the compound is full of women and children; due to the indiscriminate rifle fire, a women nursing a child is shot.

Also troubling is the incident with Schroeder, who wasn't present when the ATF began their raid, but led to his death when he tried to enter the compound. It's claimed he had a gun and drew it, but as one of the other Davidians who had accompanied him was escorted away, two more shots were heard. At least one ATF agent and the captured Davidian reported this. In the autopsy report, two gun shots are present above Schroeder's ear. While it could be argued that he still threatened them somehow (pointing the gun or brandishing another weapon after ostensibly being neutralized), the incident does sound suspiciously like an execution, if those witness accounts were correct.

What Becomes of the Evidence?

Last summer, amidst growing evidence that the FBI had used pyrotechnic tear gas rounds during its final assault on Mount Carmel, the Texas Dept. of Public Safety asked Smith to take control of several tons of evidence that it had been storing since 1993. The agency was in charge of the evidence, which was being kept in a storage locker at its headquarters on North Lamar, and found itself caught between the demands of the state's open records laws and officials from the U.S. Dept. of Justice, who wanted the evidence kept away from the public.

Last September, Judge Smith decided that the DPS was right, and ordered the Dept. of Justice to release the evidence to him. "The court's purpose is to secure the evidence so that neither the parties to the pending civil litigation, the media, or the public will perceive that the government may have the opportunity to conceal, alter, or fail to reveal evidence," Smith wrote in his order.

Federal marshals loaded up the evidence and took it back to Waco, where much of it is now stored in the basement of the federal courthouse. But now that the civil trial is essentially over, that hotly disputed evidence lies in a legal no-man's land similar to the one that existed when the DPS held the evidence. "We don't know what is supposed to happen to it now," said one federal official close to the matter.

Under federal law, Smith is not bound by the Freedom of Information Act. Nor is there any precedent under which he could release the evidence. "I don't know that anyone has an answer to that question," says James Brannon. Judge Smith "may just give it all back to the government," Brannon says.

As long as Smith keeps the evidence, there will be no discussion of the shooting of Michael Schroeder, a Davidian who was killed outside the compound by ATF agents on Feb. 28, 1993, several hours after the primary gun battle ended. Schroeder's corpse lay where it fell for four days before it was examined by Texas Rangers. Ballistics tests on the guns used by the ATF agents who shot him have never been released. Nor have the interviews the Rangers did with the ATF agents. In addition, ATF agents have testified that they shot Schroeder at a distance of 100 yards with pistols. If that's true, why did Schroeder's corpse have two bullet holes in its head? The evidence now controlled by Smith includes a cap and hood that Schroeder was wearing when he died. Schroeder's mother, Sandy Connizzo, wants to have the cap examined by forensic experts to see if there is any powder residue on it. Schroeder, she says, "has been overlooked in this whole brouhaha of the investigations. He was just as much a part of Waco as any of the rest."

That article is 19 years old, and the circumstances may have changed, but I doubt it.

And of course those who have heard about the case in passing probably aren't familiar with the psychological tactics employed by the FBI against the Davidians. Shining lights through the windows, mooning them and flipping the middle finger, playing sounds of rabbits being killed, and Nancy Sinatra's These Boots Are Made for Walkin'. With behavior like this it's no wonder more of the Davidians didn't come out and ended up perishing in the flames.

Waco seemed like little more than a spectacle for the public—a sting to demonstrate a government agency's usefulness, as well a procuring more funds. But of course it backfired and was an embarrassment.

While it's hard to verify some of the claims made by either documentary without extensive research, much of the congressional investigation footage and the FLIR (forward-looking infrared) footage very convincingly portrays many of the holes in the official narrative. The FLIR footage in particular proves the FBI to be liars regarding the "We didn't fire a shot" narrative, for there are many flashes that are obviously not natural bright spots or reflections and can only be gun fire—not to mention the multiple Davidians who were shot, sans smoke inhalation.
Posted by Cherry Tree Chopper at 6:58 AM