The Etiology of Transvestism and Transsexualism

In an earlier post, I wrote an overview of the phenomenon of Drag Queen Story Hour (DQSH), and the first part consisted mostly of data from different studies about drag queens and crossdressers and their tendencies compared to the overall population.

The difference between crossdressers and drag queens (from here on out I will generally refer to these two subgroups as transvestites) is the former are generally men who crossdress, perhaps for their own personal amusement and often in private, while the latter are entertainers presenting before a larger audience.

The bulk of studies about transvestites indicate that the selected samples tend to identify as heterosexual. But the likelihood of these men having sex with other men is higher than the general population.

Drag is interconnected to the sexuality of the person who dresses in clothing of the opposite sex. Respondents to the surveys in several of the studies featured indicated that many of them experienced sexual arousal or orgasm in relation to crossdressing.

One topic I neglected to touch on was the etiology and the psychological basis for men being drawn to drag in the first place. I'll include the abstract of one paper because it's a nice summary of general information about autogynephilia:

Intuition would lead most to expect transvestites would be homosexual, but with autogynephilia, a paraphilia where the male is aroused by the notion of dressing and behaving like a female or a belief that he is a female, he's often expressing his attraction to the female form in... a more personal way. If autogynephilia, a paraphilia, is the main culprit for nonhomosexual MtF transsexualism, then one way of interpreting the phenomenon is that this form of transsexualism itself is merely a paraphilia. [3] Additionally, paraphilias tend to cooccur or cluster, which would explain why this particular variant of transsexualism tends to have a higher amount of comorbid paraphilias. [4]

Blanchard, in a study with a sample of 212 adult male-to-female transsexuals, separated his subjects into four groups: heterosexual, bisexual, analloerotic (a lack of or very low attraction to males or females), and homosexual. The three non-homosexual (yes, the category bisexual is included amongst these three, even though bisexuality generally includes some degree of homosexual attraction, but this is a special distinction brought about by Blanchard's studies that will be elucidated further as we go) groups were more likely to report sexual arousal as a result of cross-gender fantasies. In other words, the non-homosexual groups exhibited a greater likelihood of exhibiting autogynephilia. [5]

What this finding suggests is that gender dysphoria is more complex than is usually stated in the media, whether the reportage is positive or negative regarding the subject. Hence, autogynephilic gender dysphoria may be one variant or one of multiple subsets of gender dysphoria.

Transvestites may or may not be gender dysphoric or homosexual, but autogynephilia appears to be common amongst them and certainly higher than the general population.

It's even possible that autogynephilic transexuals or transvestites may prefer male partners not because they're more attracted (or attracted at all) to males, but having a male partner makes him feel "more like a woman" and contributes to satisfying his autogynephilic urges. This possibility is greater for those who are gender dysphoric and identify as bisexual [6]. This may explain the higher tendency of transvestites to engage in homosexual behavior compared to the general population, despite often identifying as heterosexual. Or in some instances, transvestites sexual preference varies when they're either presenting as a male or a female; meaning if they are crossdressed, they are more likely to identify as bisexual or homosexual or to engage in such acts—not necessarily or always because they have a sexual preference or even sexual interest for other men, but because other men are a component of the autogynephilic fantasy. Ultimately, the sexual engagement with men is to complete the fantasy of being a woman.

Blanchard has proposed at least four distinct forms of autogynephilia: physiological, where the male fantasizes about physiological aspects of being a woman, such as lactating or pregnancy; behavioral, where the man fantasizes about actions associated with women, such as knitting; anatomic (Blanchard has observed this usually corresponds with transvestism rather than without), which involves fantasizing about possessing the anatomy of a woman, and even an act such as shaving the legs can be arousing because the man associates this as being symbolic of more feminine anatomy; and transvestic, which clearly results in forms of transvestism. [7] While the fourth is clearly contingent on actual transvestism, the other three forms can apply to transvestites and men who have never crossdressed.

When Blanchard went through the questionnaire data of 3,500 patients at a gender identity clinic and narrowed that population down to a sample of 210 who scored as non-homosexual and with some degree of autogynephilic tendencies, the results showed that 90% of these men acknowledged some history of transvestism; 35% acknowledged transvestism alone; 55% acknowledged fetishism as well as transvestism; and the remaining 10% denied both [8].

In short, some form of autogynephilia is highly correlated with transvestism.

Interestingly, female-to-male transsexuals appear to have less variation: fetishistic behavior related to cross-dressing is extremely rare and most are homosexual rather than heterosexual. It would seem that adopting a masculine appearance and anatomy has no inherent sexual value to an FtM transsexual, except in very rare cases, if at all [11]. 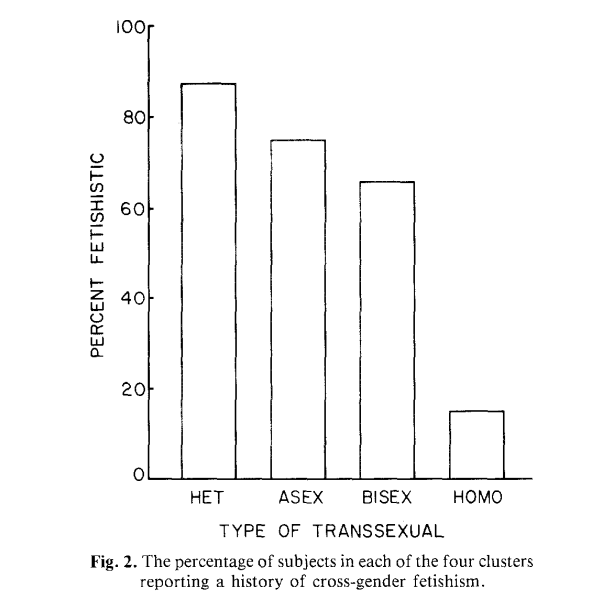 In regards to the somewhat high number of 15% (as seen in the graph above and in Blanchard's 1985 study) of homosexual transsexuals being classified as experiencing autogynephilic arousal, Blanchard believes many of these could have been erroneously classed as homosexual instead of heterosexual because they had misrepresented their erotic interests on the Modified Androphilia and Gynephilia Scales. One subject later confided that he had lied about homosexual attraction because he thought it would improve his chances to be granted a sex-change operation. A heterosexual transsexual will often lie to the examiner about homosexual attraction if they believe deceit will aid in their transition process. [15]

In contrast, the non-homosexual transsexuals' slower development can be explained by autogynephilia. Autogynephilic transsexualism is a secondary phenomenon that develops after years (though in some cases the subject never goes beyond standard transvestism) of partial cross-dressing, complete cross-dressing, appearing cross-dressed in public, and adopting a feminine name. [18]

Furthermore, not only are those with autogynephilia concerned with having their sexual fantasies of being a woman consummated—sometimes referred to as an autogynephilic interpersonal fantasy, but this fantasy also becomes stronger once the individual transitions, with reports of feeling greater sexual attraction to men, and in some cases this leads to the first sexual experience with a male. This helps to explain why many of these men seem to spend their whole life solely being attracted to women, then later on or after reassignment, they pursue men instead or seemingly express homosexual urges. Their normal gynephilic interests are redirected into a fetishistic appeasement of their autogynephilia; and clinicians will mistake the development of an autogynephilic interpersonal fantasy for the sudden and unusual emergence of homosexuality in adulthood. [20]

For transvestites in particular, anatomic and behavioral autogynephilia are common, in addition to transvestic gynephilia. (lawrence) In one study, it was reported that about 1/3rd of men who had sought treatment for transvestitism primarily fantasized about being female while they crossdressed and masturbated, while this behavior was was far less commonly reported for those who hadn't sought treatment, leading researchers to hypothesize that anatomic autogynephilia was a more stressful affliction. 1/3rd of men seeking treatment for transvestism engaged in sexual behavior with men while crossdressed, and about 1/5th of men who had not sought treatment—the above is seemingly a manifestation of behavioral autogynephilia. [24]

This would mean that more than half of all purported Mtf transsexuals in all of the listed developed countries, and probably most other developed countries (except Asian ones, apparently), are predominantly wishing to transition because of autogynephilic fetishism.

The current overall prevalence figures for MtF transsexualism are 3 or 4 times higher than a few decades earlier. In the 1960s, the estimated prevalence of transsexualism in adult males was 1 in 37,000 in Sweden and about 1 in 50,000 in the USA (based on an estimate of 1 in 100,000 for the entire male population) [39]... Consider that around 3% of adult men are at least occasionally sexually aroused by the fantasy of resembling or becoming women, and that up to one half of them think about turning their fantasies into reality by taking feminizing hormones or undergoing sex reassignment [her assertion here is based on Docter and Prince's 1997 study, which I also cited in my previous post, and it's maybe a bit questionable to state it so confidently until the results are replicated AT LEAST once with a similar sample size]. Men with these sexual fantasies nearly always decide not to act them out; but if only small numbers of them were to reconsider, conclude that they were appropriate candidates for sex reassignment and decide to actively pursue sex reassignment, the prevalence of transsexualism could easily increase dramatically. I theorize that this is what has occurred in recent years: the threshold at which autogynephilic men consider themselves to be appropriate candidates for sex reassignment has become progressively lower in contemporary Western countries. Docter and Prince [27] believed they had observed such an attitudinal shift in the surveys of cross-dressing men they conducted in 1972 and 1997. This explanation is also consistent with the observation that the relative prevalence of the nonhomosexual type of MtF transsexualism has increased over time in several Western countries. [31]

Transgender activists tend to believe that it's the new-found acceptance and tolerance society expresses (whether manufactured by elites or otherwise) towards transgenderism that is responsible for the increase in those seeking reassignment surgery or identifying as the opposite sex. In the past, they were so heavily discouraged and shamed, they'd never even broach the topic.

But it seems far more likely that people are being influenced by external sources to transition rather than it being some innate need that was being suppressed. The rise in non-homosexual MtF transsexualism, which is associated with gender dysphoria and autogynephilic fetishism, and the apparent spectrum of deviance, often beginning with crossdressing and later giving way to full-blown transsexualism or an idealization or fantasization of that lifestyle, increasingly points to transgenderism as an aberrant phenomenon that is on the rise not only because the necessary oppressive elements have been removed, but because of the decadence we are inured in and the pro-transgender propaganda (and there is a lot of money pushing this agenda from elites, notably the Pritzkers) we are inundated with on a regular basis.

[5]: Ray Blanchard, "The Concept of Autogynephilia and the Typology of Male Gender Dysphoria," The Journal of Nervous and Mental Disease, Vol. 177, No. 10 (1989), p. 616–623. For this particular citation and throughout this article of mine, homosexual and heterosexual orientations are in reference to chromosomal sex rather than from the perspective of what the person identifies as. Ray Blanchard, "Typology of Male-to-Female Transsexualism," Archives of Sexual Behavior, Vol. 14, No. 3 (1985), p. 255.

[23]: Anne A. Lawrence, "Becoming What We Love: Autogynephilic Transsexualism Conceptualized as an Expression of Romantic Love," Perspectives in Biology and Medicine, Vol. 50, No. 4 (Autumn 2007), p. 516.