The Psychology of Pandemics 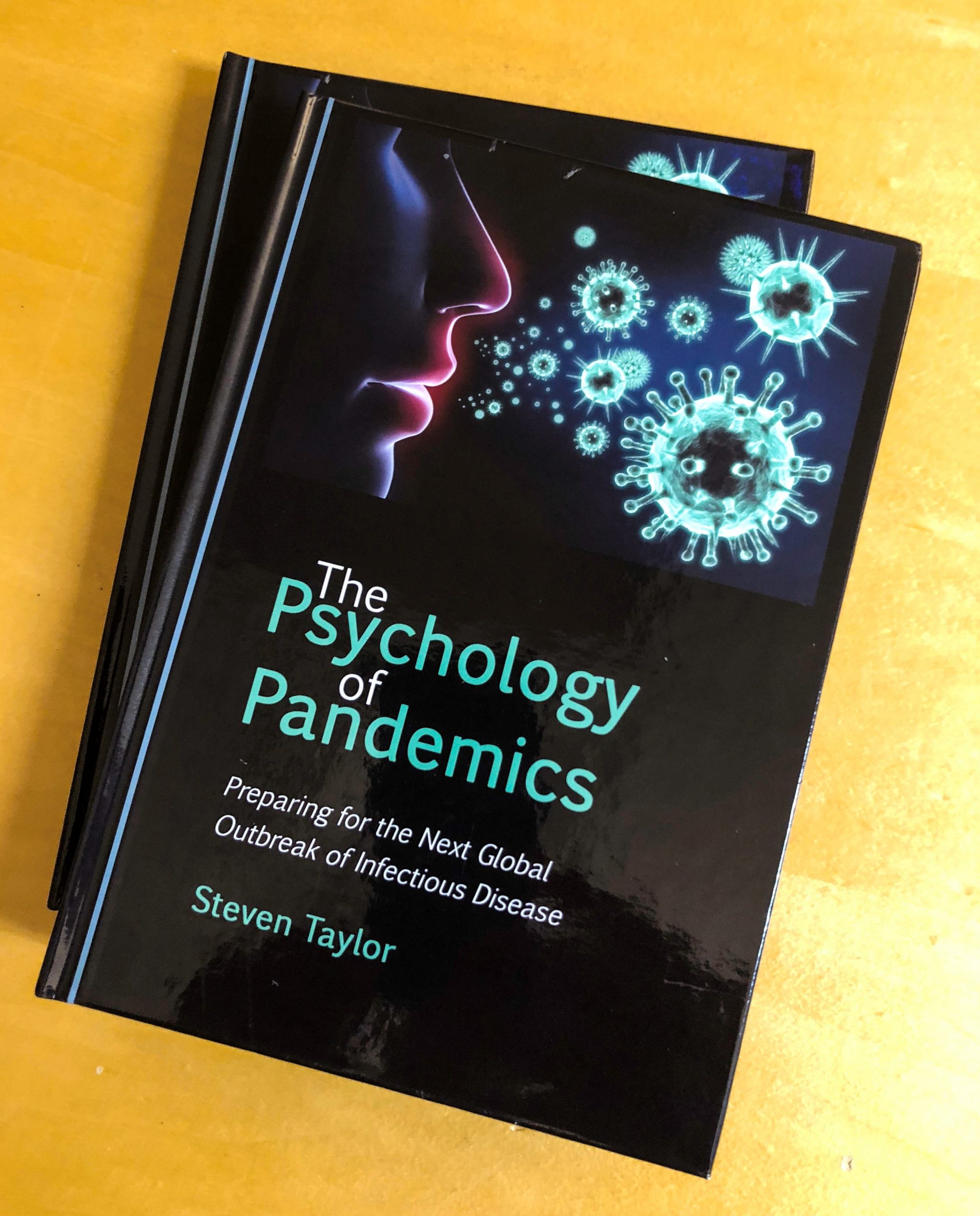 Steven Taylor is a professor and clinical psychologist who wrote a book titled The Psychology of Pandemics. The book was published in October of 2019, just a month before the Covid-19 story broke. One might suggest that he predicted or had insider knowledge about the coming event because of how prescient his book is. I can't find much information about Taylor outside of his publications, so I can't confirm or deny his involvement in any sort of conspiracy (I checked into obvious connections like Bill Gates, World Economic Forum, etc.).
However, coincidence or not, he demonstrates so many similarities between past viral outbreaks to the Covid-19 event... all the lessons were already there from history, only this is a hyped-up "pandemic" on steroids. [1]
Much of what Taylor has to say is tedious and overly focused on how to make the herd comply with their overlords for pandemic preparedness. Taylor knew there would be a future "pandemic," as many have happened in the past, and every year, there are scientists warning about future pandemics. But could he have predicted a more impotent virus? You would think he would denounce this as a hoax. "I meant an actual pandemic," he would say... If you thought that, then you'd be wrong, because he is promoting the same hoax as the MSM.
None of the supposed post-1918 pandemics have been all that noteworthy, and we certainly haven't had anything on the scale of the bubonic plague. The key ingredient is the pharmaceutical industry gearing up in tandem with the media to hype these events, so they can sell their vaccines. The Covid-19 hoax is profitable and expedient for far more than vaccine manufacturers. You can also look to the "Great Reset" of the World Economic Forum and adjacent groups. The environmentalists are chipping in for climate lockdowns. Technologists will also have many applications when it comes to the expansion of the surveillance state and the implementation of gene therapy and other innovations.
1918 Influenza Pandemic
Taylor chooses to start his first chapter with a quote from a man who experienced the 1918 influenza pandemic. Both Covid-19 skeptics and believers [2] alike have referred to the 1918 event to support their arguments, and it's very often that skeptics will say that the severity of the illness, number of adverse events, hospitalization, and rate of death were much higher in 1918, yet they didn't do lockdowns, wear masks, or do anything overly drastic. They just "kept calm and carried on" as the stoic British phrase went (now a bit of a cuck mantra).
The more I read about 1918, the less true that seems. In the man's anecdote, he states that "The city had ground to a halt. Schools and theaters were closed, and dances and other social gatherings were banned. James was not even allowed to go to the local playground because his father feared he would fall ill. Church services were banned, despite protests from the clergy... People were afraid to leave their homes, he recalled, although it was necessary for the government to impose fines if an infected person was out in public, because some sick people refused to stay indoors." (p. 1)
Facemasks were widely used during this period, and they were even mandated by law in many locations. The article cites one instance of a man being arrested for non-compliance. The Oakland Tribune reported that the police chief had stated, “We are going to enforce this mask ordinance if we have to pack the city jail with people. This epidemic is too serious to be taken as a joke, and men arrested … will find that it’s no laughing matter when they face the police judges.” It's also true that masks are unsanitary and useless for preventing the spread of viruses—no one should even argue that cloth and surgical masks are anything but worthless. 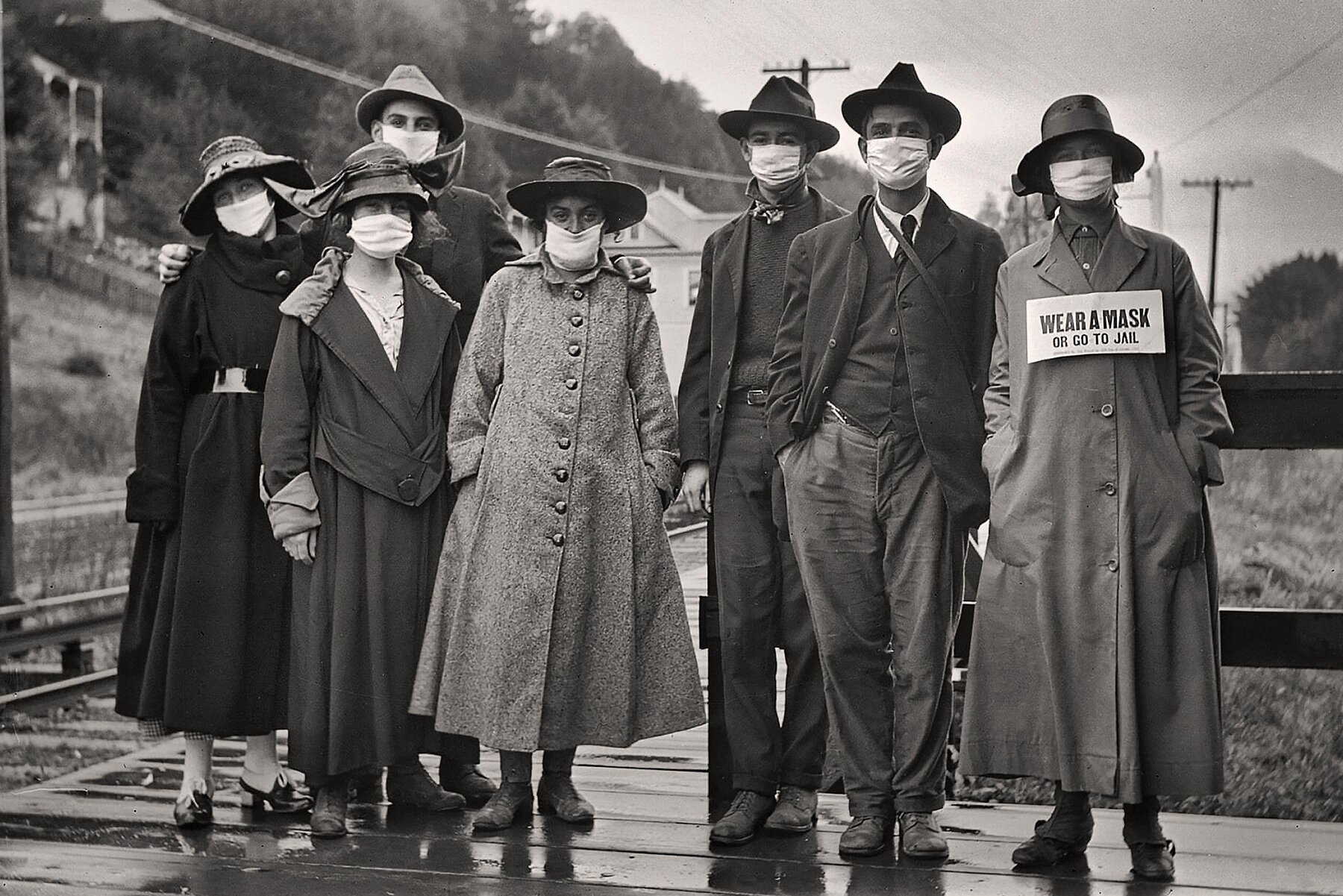 The mask mandates led to the Anti-Mask League forming to advocate against mask usage. Taylor also promotes masks. They were useless during 1918-1920, and they are useless now. Not very surprising. 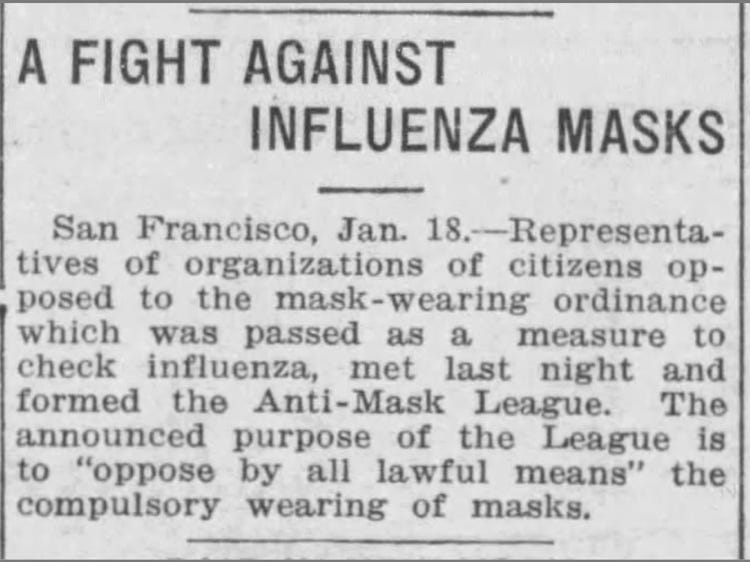 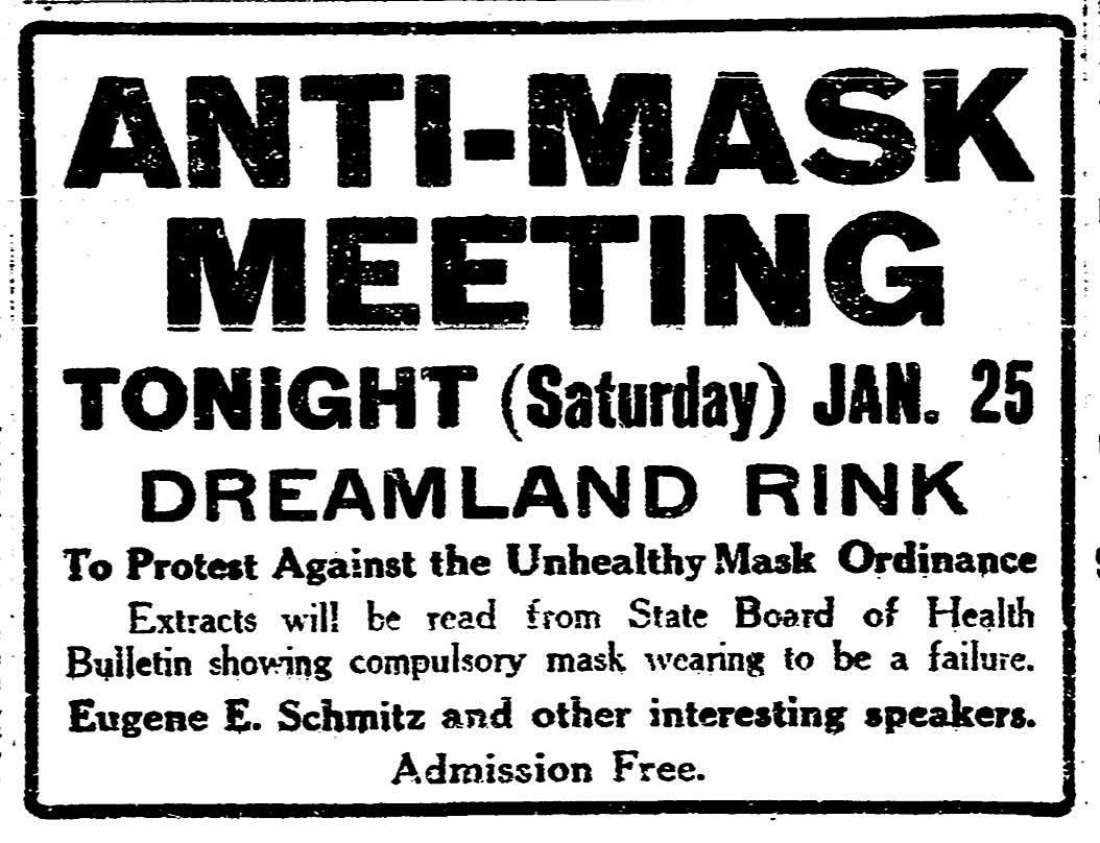 In a post-pandemic world, people will have experienced all kinds of losses, including the loss of friends and loved ones due to the coronavirus, the loss of jobs, the bankruptcy of businesses, and foreclosures on homes. Marriages and other relationships will have collapsed under the pressures of lockdown and mounting financial hardship. People will be wary about shaking hands or hugging one another, at least in the short term. An estimated 10% of people will develop severe psychological problems, such as mood disorders, anxiety disorders, or PTSD. These people would likely need help from a mental health professional.

You'd have to be a pretty awful person to recognize Covid-19 is equivalent to the flu, only the death numbers are padded by combining various other diseases and a positive PCR test or the appraisal of symptoms equivalent to Covid-19, and then suggest measures that will damage a country and its people.
Oh, don't worry, there's a "silver lining!"

But the news isn’t all bad. The research on resilience tells us that two-thirds of people will be resilient to the stresses of COVID-19. Some of these people will experience renewed purpose and meaning in their lives, through helping others during the pandemic.

At least destroying the economy and small businesses, the transference of wealth to oligarchs, ruining numerous lives, and needlessly taking our freedoms away will result in a few people finding meaning... I believe this is what he would call Post-traumatic growth (Taylor has coined a few new phrases, but this concept was thought up by Richard Tedeschi and Lawrence Calhoun.)

Laughably, Taylor has coined two new syndromes to describe two groups of people—roughly these correspond to the believers and the skeptics. The former exaggerate the potency of Covid-19 and blindly listen to a handpicked set of experts, while the latter realize the virus is not a serious threat, and they have a realistic perspective and scrutinize the data.

Covid Stress Syndrome (CSS) is what the most fervent of believers may develop, whereas Covid Disregard Syndrome (CDS) applies to the skeptics.
From the abstract of a paper discussing CSS:

Research shows that the COVID Stress Scales have a robust multifactorial structure, representing five correlated facets of COVID-19-related distress: (a) Fear of the dangerousness of COVID-19, which includes fear of coming into contact with fomites potentially contaminated with SARSCoV2, (b) worry about socioeconomic costs of COVID-19 (e.g., worry about personal finances and disruption in the supply chain), (c) xenophobic fears that foreigners are spreading SARSCoV2, (d) traumatic stress symptoms associated with direct or vicarious traumatic exposure to COVID-19 (nightmares, intrusive thoughts, or images related to COVID-19), and (e) COVID-19-related compulsive checking and reassurance seeking. These factors cohere to form a COVID stress syndrome, which we sought to further delineate in the present study.

Frankly, most people probably meet (b)—economic concerns, regardless of which side of the issue they are on. Do we really need to make up syndromes specific to Covid-19, though? Pretty much any disease can cause a degree of stress; when there is a serious pandemic response, doubly so. I checked, and there isn't an "Influenza Stress Syndrome" or anything like that. This psychologist is really milking Covid-19 for all it's worth with his systematic approach.
Of the sample, 16% of participants (n = 6,854) were found to be in the most severe class of the scale and may warrant mental health treatment. Just think of how low mental illness would be if we didn't have a society that promoted fatness and unhealthy lifestyles, and we didn't hoax a pandemic.
I'm embarrassed to think someone might actually be diagnosed with CSS, and they will tell their friends about how they have it; Taylor has gotten some recognition for his book, but he doesn't seem to be getting a lot of traction otherwise, so I think we can all point and laugh at his attempt to become the new pandemic guru (On the other hand, his Covid-19 publications have received a fair number of citations, so these contributions could become integrated more visibly into the narrative on some level.). We really don't need a fancy syndrome distinction to reflect the response of a person to multiple stressors. You could insert [X] all day in front of "Stress Syndrome" for basically anything. It's stupid.
CDS-afflicted people refuse vaccines, masks, social distancing, etc. They also believe in "conspiracy theories." They need to be broken down for the vaccination agenda. 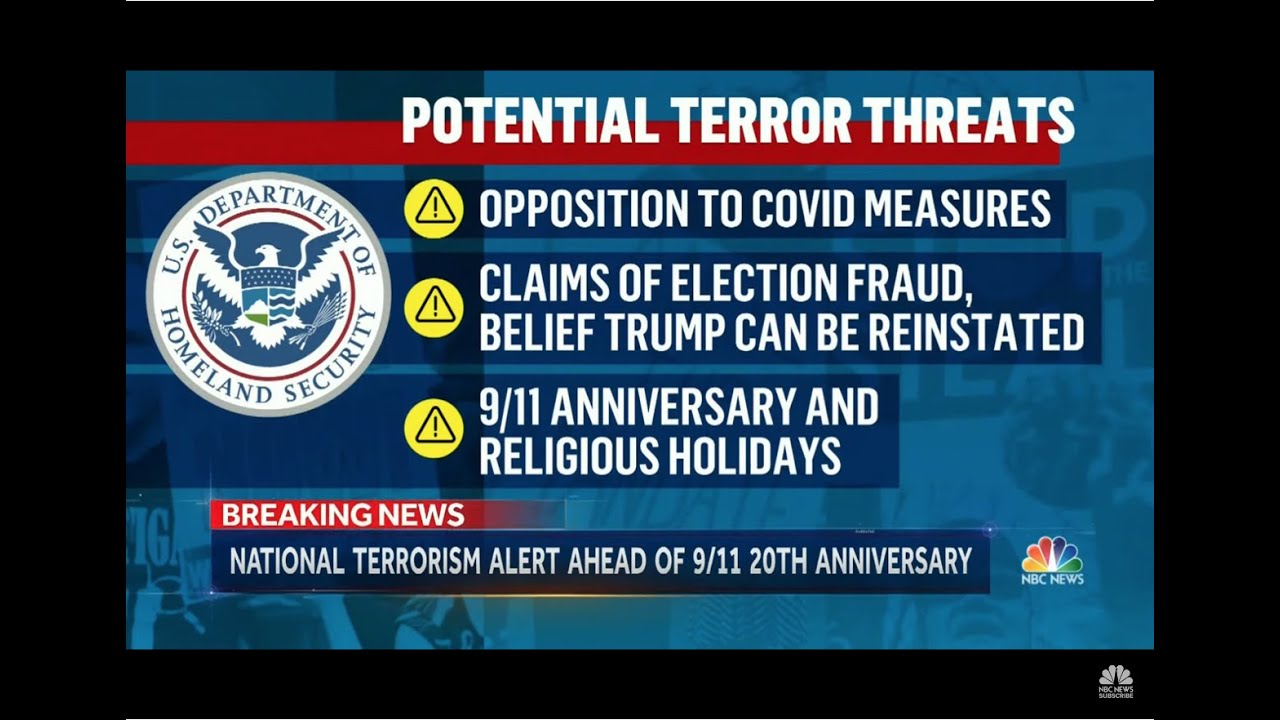 Right, along with people who think the democrats stole the election or that 9/11 was an inside job and/or involved Israelis.
NOTES:
[1]: Interestingly, he actually started writing the book in 2018 because that year was the centenary of the Kansas Spanish Flu, which began in 1918. Covid-19 began right at the end of 2019, and it's kind of amusing how close it was to the centenary. There's probably no significance to this, but I thought it was worth pointing out.
[2]: Skeptics refers to those who are critical of the Covid-19 narrative as it has been presented by governments and MSM entities. They usually oppose lockdowns, hastily rolled-out vaccination campaigns, and realize the media distortions and dispute these points accordingly. As with anything else, there is a spectrum, and the skeptics realize that what we know as "Covid-19" is literally just the flu or the common cold.
Believers, of course, are the ones who believe the constantly flip-flopping narrative, "trust science," and get injected with experimental vaccines.
Posted by Cherry Tree Chopper at 3:52 PM No comments: